Fra Angelico’s The Annunciation in the Cortona Altarpiece

Today we meet Fra Angelico. An early Italian Renaissance painter who was also a Dominican friar. When he joined the order, he changed his name to Fra Giovanni da Fiesole, or Father John of Fiesole. Later he was nicknamed Fra Beato Angelico, or Fra Angelico. His modest piety and his beautiful paintings earned him the nickname Father Angel, or Father Beautiful Angel. Now he is almost universally referred to as Fra Angelico.

As one would suppose, his art revolved around religious themes. One of his favorite subjects was the Annunciation,. Fra Angelico was influenced by the International Gothic style, by the colors of Sienna and by Giotto’s work. His work has the elements of the early Renaissance, while retaining the elegant lines of Gothic painting.

The piece we will focus on is an altarpiece, sometimes called a retable. That means that the piece sits on the altar, or on a table placed behind the altar, as opposed to a piece which sits on the floor.  It was first made for the Church of Gesu of Cortona, but has since been moved into the Museo Diocesano in Cortona. When this painting is referred to, the city of Cartona is always included so this is The Annunciation of Cortona. This is necessary because Fra Angelico painted many Annunciations.

As we read this work we have the angel Gabriel arriving from the left to tell Mary that she is going to have a child. Mary is seated on the right, in a portico reading her Bible. Gabriel is clothed in glory, quite literally as we see the rays of golden light shining around him. The sumptuous pink color and gold thread of the robe evokes the riches of heaven. His wings are luminous. The angel has just stepped into Mary’s garden and is intent on sharing the message he has been entrusted with. His head is jutted forward, his eyes intent on Mary.

Each figure is framed by their own arch, yet even with a column between them, they are connected by their eyes, and by the words that pass between them.  Their bodies echo each other leaning together, Gabriel’s posture almost interpreted as bowing down to Mary.  Mary and Gabriel are also connected by Gabriel’s gesture toward Mary. In art it is always wise to take note of someone pointing. It’s as if the artist is saying, here…pay attention. In this case Gabriel is pointing with one hand to Mary, and with the other to God, as he explains why he has come. Mary and Gabriel are both spatially and spiritually connected in this moment.

Mary is seated with her arms crossed signifying humble acceptance. Mary is listening intently to the angel and making eye contact. In many Annunciations Mary has her gaze averted, but here we see her gaze is on Gabriel, as if she doesn’t want to miss anything this angelic emissary has to say. Seated on a throne, we see a foreshadowing of Mary’s future when she will be referred to as Queen of Heaven. Fra Angelico is not trying to recreate a historically accurate image of the Angel’s visit to Marry, but a theological image that communicates the mystery of the incarnation, and so Mary wears rich clothing edged in gold and is seated upon a throne.

Mary is clothed in a red robe, the color of blood and earth, a symbol of humanity. She is covered by a blue cloak denoting divinity, heaven and royalty. Red and blue are commonly used by artists in this time period to emphasize the human mother, Mary, is carrying the divine within her. The color blue will commonly signify the Virgin Mary, but particularly during the period she is ‘with child’. For viewers this helped to make visual the idea of the incarnation, that Christ left heaven and took on flesh, not only that he came to earth as a baby.

This coming together of humanity and divinity is hard to fully grasp.  To elaborate on this idea we have the Angel Gabriel, a divine being, stepping into the walled garden, the world, bring the message that the God of heaven, in this very moment, is entering into Mary, a human. The Annunciation is the moment of the incarnation and Fra Angelico uses multiple visual clues to remind us of this fact.

Above Mary, we see a dove, the symbol of the Holy Spirit in a burst of light. The Bible says that Mary will conceive a child miraculously by the Holy Spirit.  Just above the dove is a roundel with an older, bearded man. Some have interpreted this to be God the Father, who is watching the unfolding scene, others believe this  is the prophet Isaiah who prophesied , Therefore the Lord himself will give you a sign: The virgin will conceive and give birth to a son, and will call him Immanuel (which means God with us).

We should also note that Mary and the Angel are too large for the building they are in. If Mary were to stand, her head would come to the ceiling. Again, Fra Angelico, while painting a realistic image in many ways is more concerned with communicating spiritual truths, and he makes use of hieretic scale, meaning the size of figures informs us as to their importance.

The words that Mary and Gabriel exchange are written in the air between them. Gabriel’s sentences are the top and bottom ones, the middle line is Mary speaking.  Gabriel says,  ‘the Holy Ghost shall come upon thee, and the power of the highest shall overshadow thee.’ Mary answers, ‘Behold the handmaid of the Lord; be it unto me according to thy word.’  The interesting thing about these painted words is that Mary’s are upside down and read from right to left. This is because we are not the ones who are supposed to read the words, God is, and so they are oriented for God’s view.

As we move to the secondary scene in the work I want you to note the colonnades that run down the side of the building behind the angel. The way the columns are painted is what is meant by perspective. Using mathematics, artists began to create a focal point, generally on the horizon line (where the sky meets the earth) and to draw parallel lines out from that point so that they could orient objects correctly so that the images have depth. Think of train tracks, as they disappear in the distance they appear to come together. In this painting, the vanishing point is to the left, unusual for Fra Angelico. The pillars get smaller in an orderly way and appear to recess back into space. The same is true for the furniture inside of the room. Once an artist decided on the vanishing point, he could orient everything else using math so that it presented a realistic space.

Along the top of the colonnades is an entablature, and a pink line runs through it.  If you follow that line you will come to a secondary scene painted in the top left corner. This is the expulsion from the Garden of Eden. The angel with a sword is sending a grieving Adam and Eve out of paradise.

As we’ve noted in earlier articles, it was common to include references to Christ death in the paintings related to his birth. In the same way, it was also common for artist to look back, back to where the whole story started. Why was a Savior needed? Why did God need to come as a baby to save His people? Adam and Eve brought sin into the world, their story is a key element in the nativity story.

Jesus is sometimes referred to as the second Adam. Just as sin came into the world through one man, Adam, so would salvation be brought by one man, Christ. In the same vein, Eve was the first to eat the fruit, and was the mother of all and passed original sin onto all. In the same way, Mary, would bear the Savior and through her delivery she would deliver the world. Mary is sometimes referred to as the second Eve. Mary’s obedience, seen in this moment when she says “Be it done to me, according to your word.” negates the disobedience of Eve and begins the salvation story.

Fra Angelico was, by all accounts, a deeply pious and gentle man who sought to paint the sacred stories in such a way as to provide a visual meditation of the spiritual meaning of Biblical accounts. By including all of the details that he does, he hopes that as this painting sits on the altar, worshipers will view it and mediate on its meaning and implications. I’m guessing he would not be happy that the painting now sits in a museum admired by patrons who probably only know he is considered a great artist and that the painting is pretty, but unaware of the deep spiritual truths contained in the work.

On an Art History side note, the altarpiece contained four additional paintings in the predella, or base. These were small pictures meant to praise the virgin. On one of these, Mary’s visit to Elizabeth,  we have the first identifiable landscape in Italian painting. It is the view of Lake Trasimeno, that would be seen from Cortona. 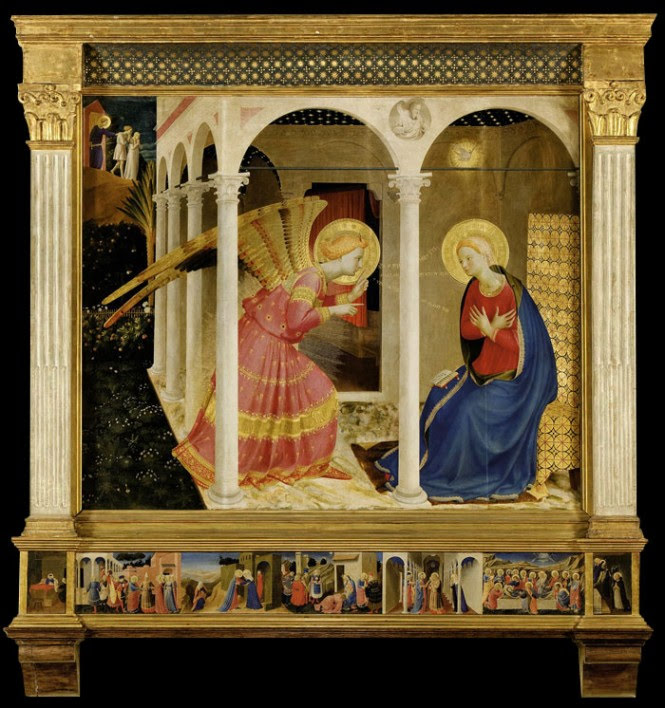 Altarpiece by Fra Angelico, The Annunciation. in Museo Diocesano in Cortona 1433-1434

Have you ever bought something new, like a blue car, and then you see that same blue car everywhere? Or someone you love gets pregnant, and then every other woman you pass is pregnant?  It’s like we suddenly develop a hyper-awareness. Same thing happened to me with plastic.  Once I saw the problem I couldn’t

The Merode Altarpiece by Robert Campin is an annunciation triptych full of symbolic meaning that was intended to lead the faithful into deep contemplation of the mysteries of Christ leaving heaven to become a man. In this post we will be exploring the backstory and context of the work. If you wish to read more

Mosaic in the Chora Church, Turkey

Welcome to day 2.  If you wish to read other post in this series you can find the links here.  As the posts go live you can access them there. Joseph also went up from Galilee, from the city of Nazareth, to Judea, to the city of David which is called Bethlehem, because he was of