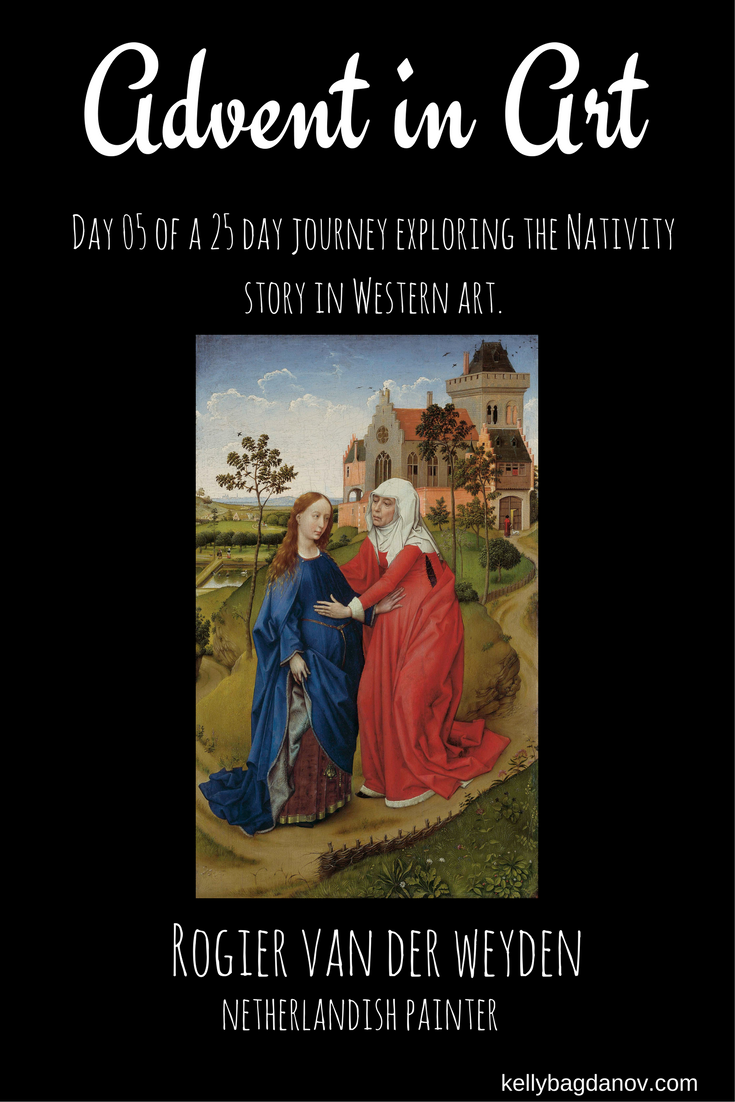 We return to the North to look at the work of a student of Robert Campin (we covered Campin on Day 8). We will be focusing on The Visitation, a small panel painting, and then taking a quicker look at The Nativity, where another version of The Visitation is painted. 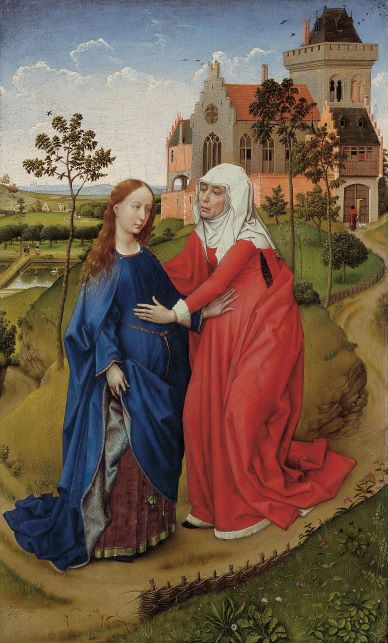 First, a little background on Rogier Van Der Weyden. He is a Netherlandish painter who was from Tournai, France, but spent most of his artistic life in Brussels. We know that he was a highly successful artists who was internationally famous during his lifetime. He, Robert Campin, and Jan Van Eyck are considered the three greatest Flemish painters of the Northern Renaissance. He held the title, Painter to the Town of Brussels. As Brussels was where the resplendent court of the Duke of Burgundy was, this was quite prestigious.

His early training is a bit fuzzy, as the records were destroyed during  World War 2. It is believed that he trained under Robert Campin in Tournai.  Civil records let us know when he became a Master, that he was generous and served on the boards of charities and his guild. We know of commissions his workshop received, and payments. With all that we do know, it is surprising that we are less sure about which paintings are his.

Van Der Weyden never signed his works. He worked in other artists workshops before becoming a master, and then when he was made a Master he had a large workshop of his own. So, while we know that he received a commission for a work, we cannot know for certain that he is the one who painted it.

During the 19th century in particular, his works were attributed to others. In recent years Art Historians have struggled to piece together his body of work. Combing through records, comparing brushstrokes and developments, even analyzing the wood used,  all they can do is come up with best guesses, some they are more sure of than others.

Art Historians are fairly sure that this single panel was done by Van Der Weyden. The full altarpiece that we will look at toward the end of this article has been attributed to his workshop, but how much, if any of it, he painted himself is unclear.

This piece is called The Visitation. It is a narrative work that tells the story of the Virgin Mary visiting her Cousin Elizabeth. Elizabeth was elderly and childless, but miraculously conceives.  She is carrying John the Baptist. Mary, pregnant with Jesus comes to spend time with Elizabeth. I’m sure it was a relief for her to be with a relative who had also experienced a miraculous pregnancy.

In the painting we see the moment of greeting between the two women. From the road in the background we know that Mary has traveled a great distance to visit. We also can see the road from Elizabeth’s home, so we know that she rushed down to greet Mary. Both women know that the babies they carry have destinies to fulfill. (On a side note, as I always found it odd, the fashion was to have high foreheads, women even shaved their hair back to get the desired higher forehead.)

According to the biblical narrative Elizabeth exclaimed to Mary, “Blessed are you among women, and blessed is the fruit of your womb! And why is this granted to me that the mother of my Lord should come to me?  For behold, when the sound of your greeting came to my ears, the baby in my womb leaped for joy.  And blessed is she who believed that there would be a fulfillment of what was spoken to her from the Lord.”

In the placement of the hands, Elizabeth’s in the forefront of the painting, we know that Mary’s child will be the more important one. Mary’s robes are blue signifying divinity and that she carries God within her. Mary’s dress contrast beautifully in it’s shade of red, which signifies the earth. We can see the age in Elizabeth’s face, so we know that she is advanced in years past the time she should be able to conceive. 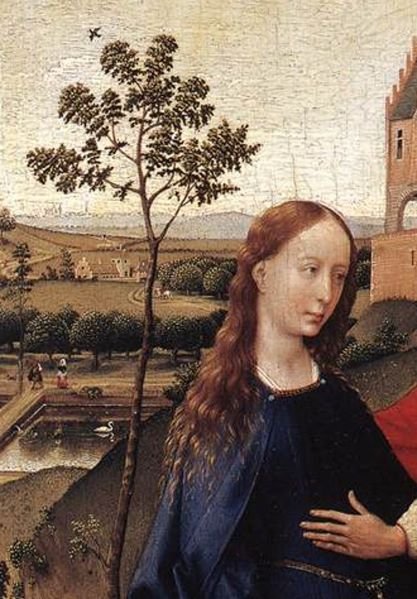 In this painting we have aerial as well as linear perspective. Aerial perspective means that distance is shown using changes in color. The mountains in the farthest parts of the background are faded and blue. The further back into the distance a painter goes the more he will blur the image, and change the realistic colors for something more monochromatic, in the blue range.

This painting, a mark of the advances in art, has a foreground, middle ground, and back ground. This adds to the realism. In the North, artists paid a great deal of attention to the small details they had in the middle and background. The landscapes in particular should be noted. Landscapes are expertly expressed, a mark of the Northern Renaissance, and the painstaking care taken to paint the small details are part of what sets this style of art apart. Also note the angular folds of the dresses the women wear. The more angular folds are another ‘tell’ of the Northern Renaissance. 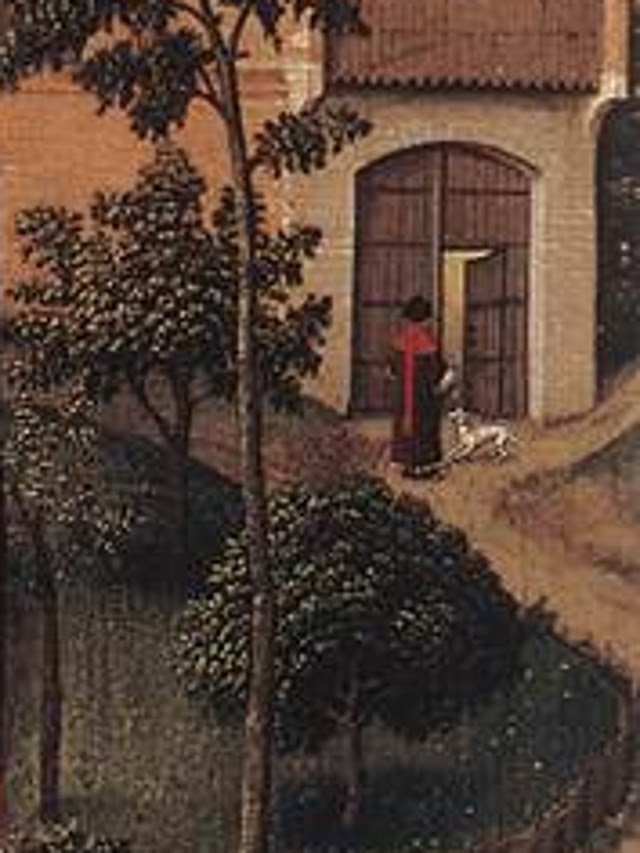 In the middle ground in front of Elizabeth’s house we have the charming detail of Zechariah, her husband, playing with their dog. Despite their size, this element is it’s own completed work. As we look in the middle ground on the opposite side, we have a detailed landscape with water, birds, people, and another house. These could be miniature paintings in their own right.

This painting was completed as a single panel, but was redone with a bit of cropping and included on an altarpiece that had the story of the Nativity as it’s theme. You can find the painting on the left panel in the reproduction above. I found one detail of this altarpiece fascinating. Annunciation is the word used when an angel arrives to give someone a message. So we have the Angel Gabriel making an Annunciation to Mary that she would have a child. When the angel appears to the shepherds to tell them the Christ has been born, that is the annunciation to the Shepherds. The Bible has many annunciation stories.

This altarpiece has two annunciations, one of which is only recorded in extra-Biblical records. On either side of the nativity, are annunciations to kings. On the right side the three wise men are being told that a baby has been born who will be the King of Kings. On the left side Augustus (then ruler of the Roman Empire) is also told of Jesus birth.

There is a great deal of significance to including both of these. When Jesus was born, it was to be the Messiah for the nation of Israel. Throughout the Old Testament there had been hints that a savior would come for all nations, but that was pretty much unacknowledged. In this painting we have annunciations to world leaders that represent the East and the West, or the known world at the time, neither of whom have any direct connection to the nation of Israel. The meaning being made clear was that this was a Savior for the world in its entirety.

The artist of the altarpiece cannot be identified, so the credit is given to the workshop of Van Der Weyden.

If you want to read other articles in this series follow this link.

It seems a good day to end with The Magnificat, or Mary’s Song. After Elizabeth greeted Mary, here are the words that she responded with.

My soul magnifies the Lord,
and my spirit rejoices in God my Savior,
for he has looked on the humble estate of his servant.
For behold, from now on all generations will call me blessed;
for he who is mighty has done great things for me,
and holy is his name.
And his mercy is for those who fear him
from generation to generation.
He has shown strength with his arm;
he has scattered the proud in the thoughts of their hearts;
he has brought down the mighty from their thrones
and exalted those of humble estate;
he has filled the hungry with good things,
and the rich he has sent away empty.
He has helped his servant Israel,
in remembrance of his mercy,
as he spoke to our fathers,
to Abraham and to his offspring forever.”

I LOVE September.  Forget the whole ‘January is a new year’ business, it’s the start of a new school year I love. So here is my list of what needs to be done as you begin the new school year. 1.  Evaluate  Most of us want to jump straight into ordering curriculum, but there is

In 1515 an Indian rhinoceros was gifted by Sultan Muzafar II of Gujarat to the governor of Portuguese India. Genda, the rhino, had been living in captivity for some time before she began her world travels. Small zoos, called menageries, which housed exotic animals were popular with nobility, and gifting a magnificent animal was a