The Holy Family by Michelangelo 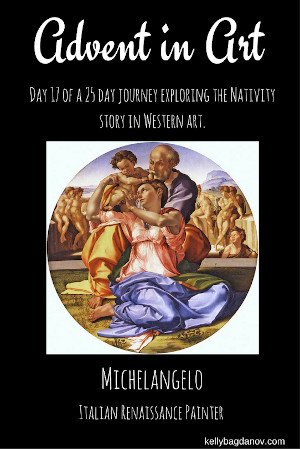 This painting was done by Michelangelo di Lodovico Buonarroti Simoni, or Michelangelo. One of the greatest artist in history, he was a master sculptor, painter, and architect. There are not enough superlatives to heap on Michelangelo. His is the most celebrated and documented life of the 16th century.

Living nearly 90 years, and producing masterpieces for most of those years, we have an abundance of his works at which to marvel. We have letters, commissions, and even 2 biography’s of his life, written while he was still alive. 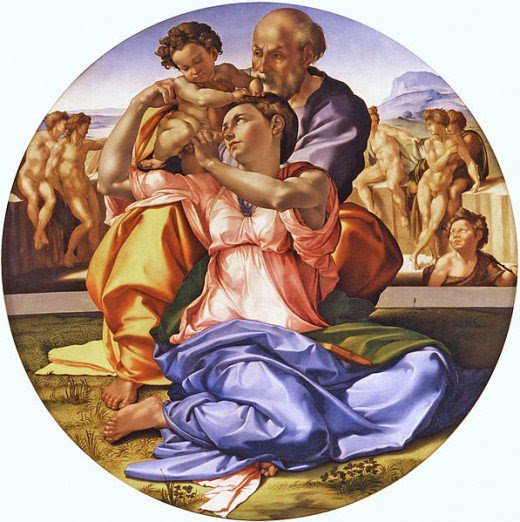 Michelangelo considered himself a sculptor, and painting a ‘lesser art’. In fact, his commission to paint the Sistine Chapel ceiling was offered due to the suggestion of a competitor who hoped the famous sculptor would fail. He not only didn’t fail, he expanded the vision for the ceiling and painted one of the most famous cycles of art ever done.

The Doni Tondo was a commission he received prior to starting the Sistine Ceiling. A tondo is a round painting, the shape commonly used for domestic scenes. Doni comes from the name of the man who commissioned the work, Agnolo Doni. The painting was to celebrate either his marriage to Maddalena Strozzi or the baptism of their first child. For either, a painting of the Holy Family would fit a domestic theme. The story goes that when the painting was delivered Michelangelo wanted 70 ducats for it. Doni countered that with sending 40 ducats. This insulted Michelangelo, who said the painting would now cost 100 ducats. Doni really wanted the painting, so he sent the original price of 70 ducats. Michelangelo was not to be so easily appeased and insisted on 145 ducats. I’m not sure how the bartering eventually ended, but records indicate it hung in the Doni house for some time.

The Doni Tondo is the only panel painting that we have by a mature Michelangelo that was painted by him without assistants. Along with the painting Michelangelo is also believed to have designed the elaborate frame.

The painting is of the Holy Family, and is unusual in several respects. The positioning of Mary and Joseph is striking. In most instances Joseph is seen off to the side, seemingly unimportant. He is portrayed as elderly so as not to be a threat to Mary’s virginity, often even sleeping, unaware of the drama unfolding around him. We feel he is very much a footnote in the story, not a major player.

Here however, we have Joseph portrayed as the family’s protector. Mary sits between his legs, and he envelops her. His head is higher than both her’s and Jesus, very unusual as this could be an indication of importance or position. In this painting Joseph is presented as the caring head of the family. There is debate over whether Joseph is handing Mary the baby, or she is handing Jesus back to him. I’m not sure it matters. Here, instead of an elaborate presentation of doctrine, we have a family portrait, an intimate, gentle moment of familial closeness.

The word for giving or gift in Latin is donare, which could be a play on the name of the family that commissioned the painting. Some who follow this line of thought think that Mary is ‘gifting’ the baby Jesus to Joseph. This would make even more sense if the painting were to commemorate the birth of a first child.

The Holy Family is painted in typical Michelangelo fashion. They feel sculpted. Both Mary and Joseph are muscular and solid. Their clothing is vibrant, and there are clear outlines around their bodies creating sharp, clear images. The volume and draping of the fabric is substantive and has weight. 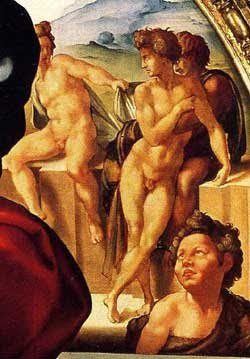 Both the colors and the sculpted feel of the pose of Mary are precursors of the work that Michelangelo will do when painting the sibyls in the Sistine Chapel. In fact, the colors themselves are worth paying attention to, as this work and the Sistine Chapel will usher in a new age in painting, Mannerism. The heightened emotions and colors of Michelangelo’s style will inspire many of his contemporaries.

In contrast to the clear figures in the foreground, the figures in the distance are a bit vague, their edges blurred. We have a small wall separating the foreground from the figures in the background. On the right is John the Baptist, also a child. He would only have been a few months older than Christ. John was the patron saint of Florence and so it was very common for Florentine artist to include him in their paintings of Jesus’ family, or of the Madonna and child.

Behind him are 5 mysterious nudes. Two to the left, three to the right. There are theories as to who these figures represent, but no one really knows for sure. I’m going to give you the theory that seems the most likely to me. The figures are presented not in space but in time, or history and represent three ages of man.

The five figures in the background represent the pagan age, or as it was sometime referred to, era ante legem meaning before the word of God. Mary who has a book on her lap represents post legem, or after the word. John the Baptist is the connection between the two eras.

John appears to be in water, appropriate as he is the baptist, but also appropriate if this painting is representing the different eras. The pagans also practiced a baptism of neophytes, and hence these are naked as going to or coming from that baptism. John practices a baptism that prepares the way for Christ, so John and water uniting the two images. 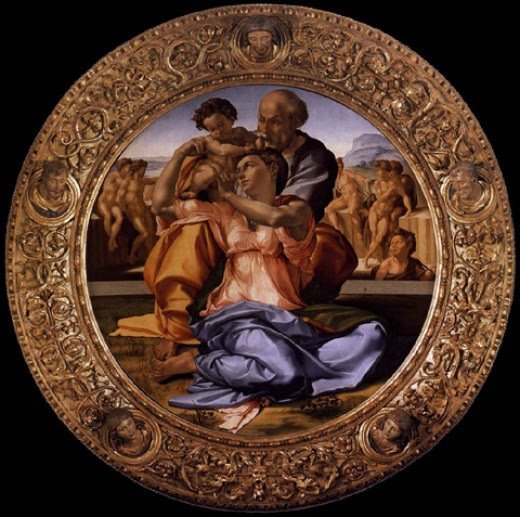 You will note that while Christ is the focus in the foreground, and John the Baptist is looking at the Family, the nudes in the background appear unaware of their presence. Another indication that we are looking at a picture of temporal distance not spatial distance.

The flowers in the front of the frame and in the grasses are clover, signifying the trinity, and cornflower or hyssop, referencing the Passion of Christ. 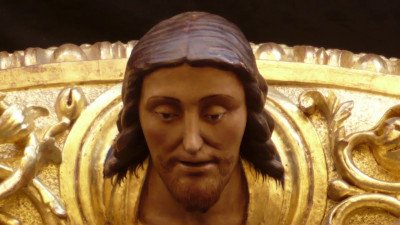 The frame, which was designed by Michelangelo and likely carved by Marco and Francesco del Tasso is gilted in gold and is still with the painting. There are flowers, moons, ribbons and other elements carved into the frame that were pulled from the family crest of the the Doni’s and his brides family, showing them linked around the frame. There are also 5 sculpted heads that stick out from the frame. At the top is Jesus, there are two prophets, and then two sibyls.

Again, the repetition of the prophets and sibyls are precursors to the iconography that Michelangelo will expound on in the Sistine Chapel. Sibyls are ancient prophetess’s and several were believed to have predicted the coming Messiah, and so are often included in religious paintings.

This is an interesting very short video of the Doni Tondo being moved while renovations were going on.

Matthias Grunwald, The Annunciation from the Isenheim Altarpiece

The ability to place Shakespeare, the man, into his historical context can enrich our reading and understanding of his plays. While dealing with universal themes that will resonate with modern audiences, there are portions that will yield richer rewards if we are able to place the plays in their context. Shakespeare was born during the

This has been a difficult article for me to write and one I have put off repeatedly.  I was asked again today about Charter Schools and I decided it was time I address the issue. First, and most importantly, I fervently believe parents should be able to determine how best to educate their children.  We