The Annunciation by Titian 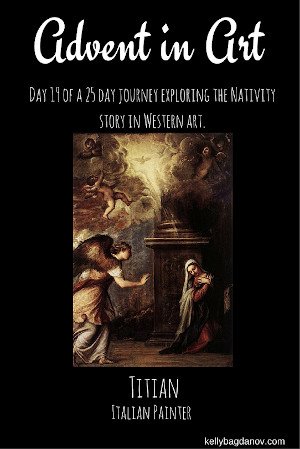 “My soul magnifies the Lord, and my spirit rejoices in God my Savior,
for he has looked on the humble estate of his servant.
For behold, from now on all generations will call me blessed;
for he who is mighty has done great things for me,
and holy is his name.
And his mercy is for those who fear him
from generation to generation.

Here we have the Annunciation by the Venetian master Titian. Born Tiziano Vecelli, he was an Italian painter who by some accounts lived to be 99 years old, and produced art up till the end.  He is most noted for his use of color and loose brushstrokes.

Titian was trained by both of the Bellini brothers, and painted with Giorgione. In fact, Titian’s work and Giorgione’s have often been confused. The painting we will be examining is from later in Titian’s life, when he has developed a style very uniquely his own. His contemporaries referred to him by the last line in Dante’s Paradise, “The Sun Admidst Small Stars.” Although this painting doesn’t use the vivid colors of his early works, his interest in color is still evident. 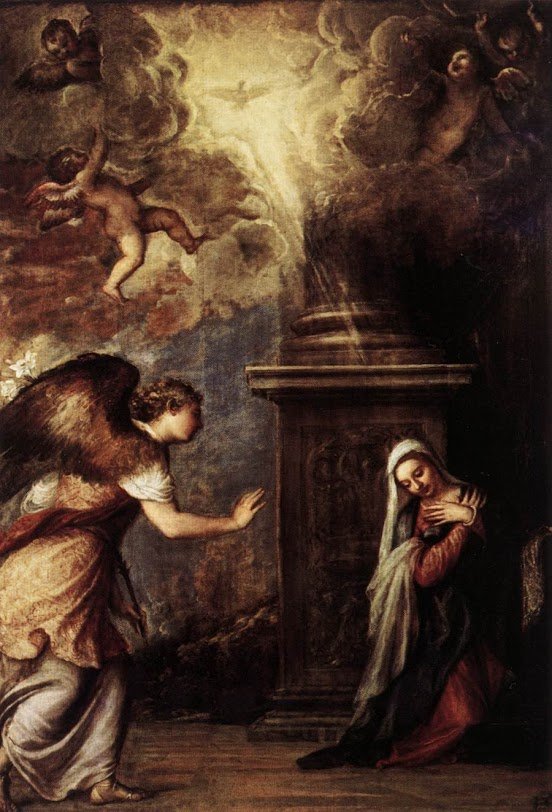 In this work we have Gabriel rushing in from the left, land raised, body turned, clothes still in motion. In contrast Mary is kneeling with arms crossed in an attitude of humble submission. She may be in the very act of kneeling as one knee appears to be not quite to the ground. Once again, we have no halo, but the white from her veil is glowing in the light streaming from above.

Where these events are taking place is unclear. There is a very large column behind Mary, and the floor looks to be that of an interior, however the background beyond Mary seems to be outdoors. Obviously, her earthly surroundings are not what is important to Titian.  Only Mary is grounding the story on the earth, everything else in the painting is from the heavenly realm.  This is a switch from the works we have examined so far in our Advent series. Up to now, Gabriel has been the surprising heavenly figure, and a dove, which is often hard to even find.

In contrast, in this painting the dove is not just easily seen, it is backlit, as it appears to stand, wings spread in the burst of light from heaven. This is hardly the shaft of light coming through a window that we’ve seen in earlier Annunciations. Here we have the heavens opening in all of their glory.

Our eye is drawn to the drama unfolding between Mary and Gabriel and then our attention quickly moves to look up at the opening in the sky. Both movements, Gabriel toward Mary and the heavens light shining on Mary, makes her the focus. 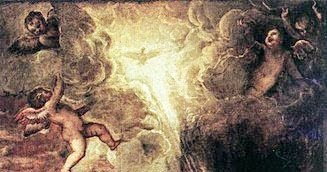 The top third of the painting is the clouds of heaven filled with small angels, the opening, and the dove. The small angels, or putti, up in the clouds deserve a closer look. They are charming in their chubby toddler-like appearance. Starting on the left and moving toward the right, the first putti we see is the only one looking down on the scene below. He seems curious to see how the drama will unfold.

The putti below him is the most noticeable. He appears to be either pulling back the clouds, or perhaps was pushed backwards as the dove burst forth. Either way, I’m glad he has his little wings to keep him aloft.  The two small angels on the right are both gazing toward heaven. The one in the light has one hand raised toward heaven and the other gesturing down. The one that is hardest to make out has both hands raised as if in praise.

As I consider the postures of each putti I wonder if the picture the varied responses throughout heaven to the news that God has taken on flesh so that he can save his creation. Curiosity and praise would seem to be their in equal parts.

How Titian has painted light is at the heart of this painting. In the top right the light burst forth. It is strong and bright, illuminating all else. As the light illuminates Mary, making her veil into a halo, we know that this is the moment of the incarnation. The room Mary is in is in darkness until illuminated from above. It reminds me of the verse in Mark 4,

“the people living in darkness have seen a great light; on those living in the land of the shadow of death a light has dawned.”

Betrayal of Jesus by Giotto aka The Kiss of Judas

This painting by Giotto – Betrayal of Jesus is appropriate for Holy Wednesday, also known as Spy Wednesday (Good Wednesday and Holy and Great Wednesday). The event commemorated on this day in holy week is the conspiracy between Judas and the Jewish leaders to have Jesus crucified. I want to share a portion of this

The key to raising a reader that is often missed

We all want our children to be good readers. We want them to love books!  A child who loves to read has a huge advantage in life. But there is one common mistake we make that can quickly turn your child off to reading. That mistake, pushing them to read harder and harder books. I