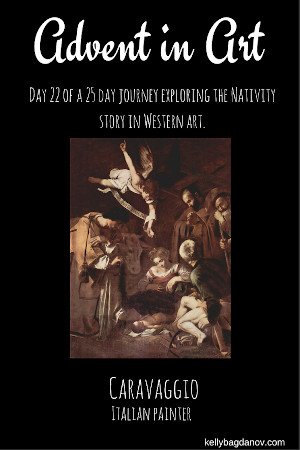 Today’s painting is famous, not just because it is by a master, but because it is on the FBI’s 10 Top Art Crimes. This work was stolen, cut from it’s frame in 1969. The rumors and stories that have circulated since have never been substantiated. It seems clear that the Mafia was behind the theft, but it is unclear what has happened since. At various times, criminals have tried to negotiate lighter sentences claiming knowledge of the work, according to two of these stories, it was destroyed.  Whatever happened, the original painting has been lost, likely never to be recovered.  This somehow seems fitting because much of what we know about the artist is from police records. 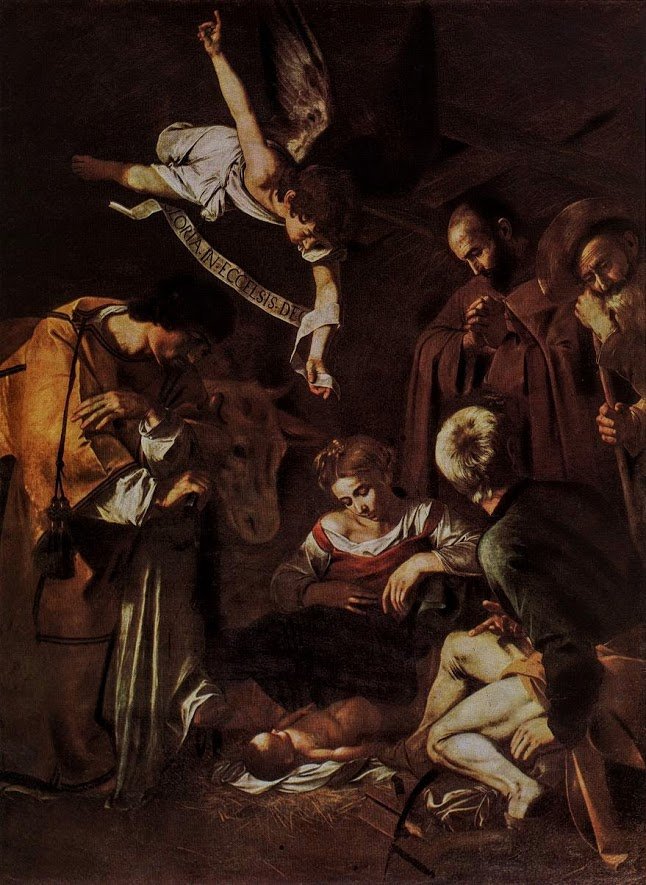 Michelangelo da Merisi, has always been referred to as Caravaggio, the town he was from. Sharing a name with the ‘divine’ Michelangelo was probably frustrating.  Caravaggio was by all accounts an angry, temperamental man, who was frequently in bar brawls, arrested for carrying a sword without a license, and then for killing someone with said sword. Fleeing the police from one location to the next is an ongoing thread in his life. Not surprisingly, he died young ,at 37.

If we set aside his personal life, and examine his work, everyone agrees, he was one of the most influential artist of the 1600’s.  His innovative use of light, unflinching realism, and the emotion in his religious work is astounding. When we discussed El Greco and the Mannerists we talked about their pushing against the restraints of the Renaissance. Caravaggio pushed back on the Mannerists. He returned to painting things as they appear, but without the perfection and rigidity of Renaissance painters. When he painted Biblical figures he didn’t  clean them up and present them as serene and beautiful with halos. Many were shocked and felt that his paintings were disrespectful. Sometimes patrons, seeing the finished works refused them.

The Nativity that Caravaggio painted just a year before he died is one that shocked. His Mary has just given birth, she is disheveled and tired looking, sitting on the ground. Her dress has drifted down one shoulder. This is not a Madonna who already looks as if she is on her way to being enthroned in heaven, but a young girl, tired and recovering from labor. Shocking the viewers of his day was not just the realism, but the theological message the painting conveyed. Many felt the Virgin had a miraculous birth with no pain and no breaking of her hymen. Not only was her conception miraculous, so was the birth. Caravaggio’s painting challenged that. 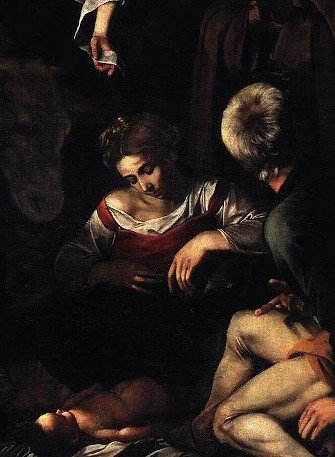 In the work we have Mary, Joseph, the baby Jesus, Saint Lawrence, Saint Francis and a shepherd. In the sky we have the angel with a banner that reads, Glory to God in the Highest. It is an odd contrast, the traditional angel, saints are present, and then the non-traditional portrayal of Mary. The piece was painted for the Oratory of San Lorenzo in Palermo, Italy. The inclusion of saints was very common, particularly if the saint was associated with the location the work was created for.

Caravaggio brought a new realism to his work, and it was new. The Renaissance sought realism in the sense that figures occupied space and appeared fully three dimensional, water glistened, and velvet looked plush….but that realism was bound by strict boundaries. These boundaries were about content, what was appropriate, and how people expected religious subjects to be treated. Figures might have looked real but they were idealized versions. Basically, every Virgin Mary had been ‘photoshopped’ to meet the expectations people had for the mother of God. Caravaggio’s realism was of another kind all together. He painted real human people who were tired, and dusty, and overwhelmed.

He also was a pioneer in the use of light, or maybe more accurately the use of the dark. Chiaroscuro is a technique where light and shade are emphasized, often with the light sourced from one particular location creating deep shadows. Caravaggio went beyond that developing tenebrism. The name comes from the Italian, meaning dark, gloomy, and mysterious. Tenebrism was an extreme form of chiaroscuro where the darkness dominates the painting and contrasts sharply with the lighted areas. Only a narrow swath of the painting is in direct light, the rest is deeply shadowed fading into black. 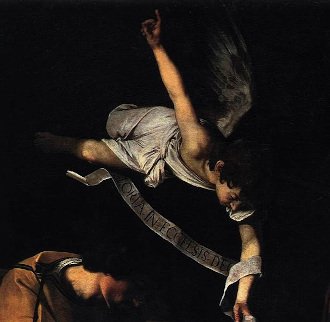 Many artists and art critics of Caravaggio’s day detested his dark, shadowed pictures and the critiques were quite harsh.  Often the truly visionary painters innovations were not valued until after they were gone. This was true of Caravaggio. His new realism interpreted his subjects with dramatic intensity. The poses and expressions are highlighted with the strong effects of light, much as a spotlight would do on a stage.

In this piece, in the foreground, we have a shepherd with his backed turned to us. Next to him is an open space. When artist present a back to the viewer we are meant to assume the viewpoint of that person. We are meant to view this scene as if we too are kneeling with the shepherd. In fact, an open place has been left for us to join the circle. Note, if you pay attention to our viewpoint, straight on at Mary, we are kneeling in that open place. We are meant to join the in the act of adoration of the Christ Child.

If you enjoyed this article, you can read the rest in the series at this link.

Video – The Conversation That Is Art

Check out the video below “Conversations in Art” and the full article here on the Blog: The Conversation That Is Art: An Introduction to the Study of Art History.   Art is an exchange of ideas that expands our understanding of what it means to be human. Across time, geography, and social constructs, artist reveal

On a typical homeschool morning it was a major accomplishment to have all the kids up, dressed, fed, and chores done.  Then we need to start school, which often went something like this. Math first, except child # 2 can’t find his book and child #4 broke his pencil. After 10 minutes of searching everyone