Vision After the Sermon 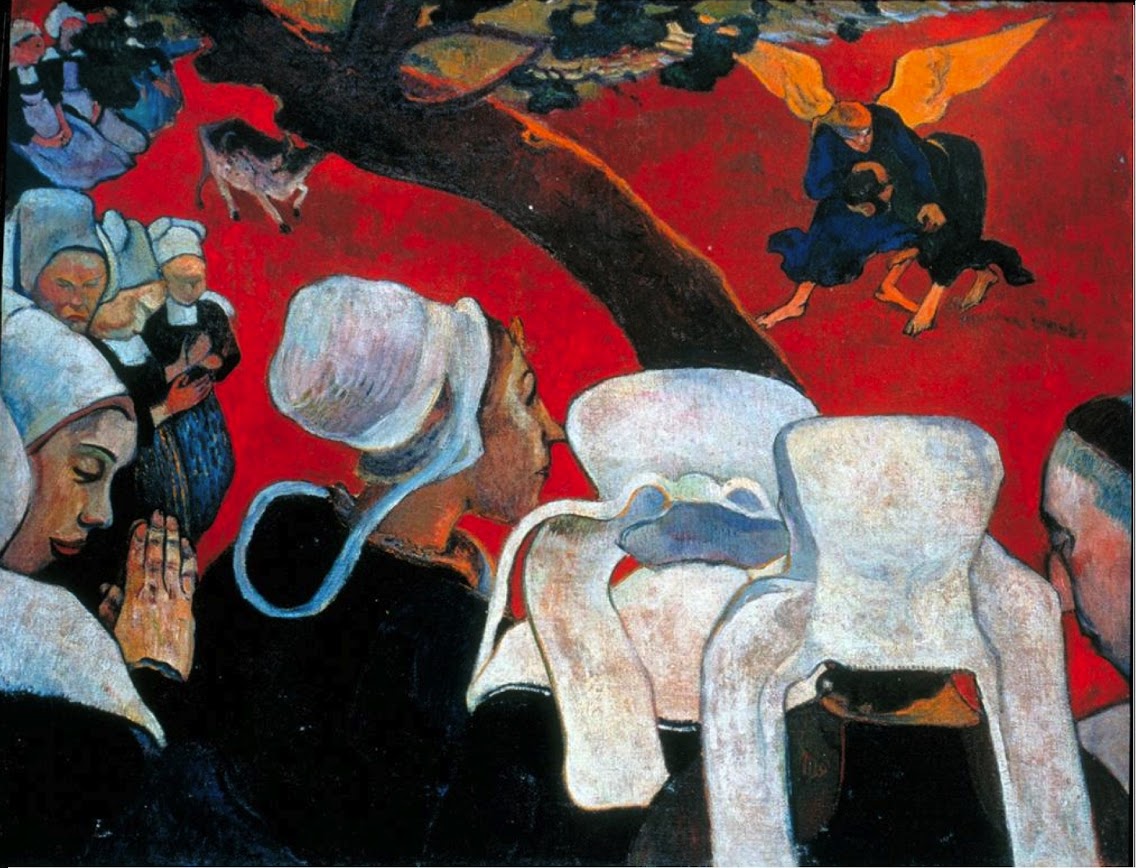 This is Paul Gauguin’s painting called Vision After the Sermon.

Gauguin was a post-impressionist French painter who painted this work in 1888. Heavily influenced by Japanese print making and primitive art, Gauguin felt European art lacked the substance and symbolism found in primitive cultures. He often spoke of himself as a ‘savage’ and claimed that Inca blood flowed through his veins.

His discontent led him to leave his wife and 5 children and move to an artist colony in Brittany, France. It was in Brittany that he painted Vision After the Sermon.

Not finding what he was looking for in Brittany his travels led him on to Tahiti and a variety of French Polynesian islands, notoriously taking a 13 year girl  as his mistress during this time. She serves as his model in multiple paintings.

Artists lives are often a striking mix of opposites, we can marvel at their insights and be shocked by their personal demons. Gauguin was known for his hard living and his rocky friendship with Van Gogh. (The ear incident.) His paintings were often rejected by the art establishment, and he felt stifled in Paris, leading him to roam looking for that elusive ‘something’. It was only after his death that his paintings began to receive critical acclaim and their significance was recognized. His influence is seen in the works of Matisse and Picasso.

Vision After the Sermon is an interesting blend of the aesthetic of primitive art with a subject that is Western European. The subject is the Biblical story of Jacob wrestling an angel set in Brittany, France. We know this by the traditional headdresses worn by the women.

What is odd is that Gauguin had never used religious themes in his art before, although Biblical themes will make appearances in future paintings. In letters during his time in Brittany he revealed a fascination with the religious nuns in Brittany, and did many paintings of their headdresses. He felt there was something authentic and basic in the faith of these women. In those letters he also discusses the shifts he is making in his art.

Naturalism and realism had dominated art for quite some time and this work by Gauguin was about to break with traditional art, and with the Impressionism that had gained a following. His ground-breaking advancements were neither recognized nor accepted during his life time, but after his death, history would recognize this work as one of the turning points in modern art.

Gauguin described his work as abstract. It is not the true abstraction that will develop over the next decades but it is a movement toward it. By eliminating depth, perspective, and shadow he was moving out of the physical world and into the world of ideas.

The red color of the background takes us further out of the natural world. The color dominates Gauguin’s work and is easily the first thing we notice. Using red in this way presents us with a one dimensional, flat space. The cow doesn’t appear to be standing on solid ground, and there is no sense of any mountains or city off in the distance. There is no attempt to create a real landscape.  Jacob and the angel are not in a meadow, on a mountain, or along a road. This is not a ‘real’ place. 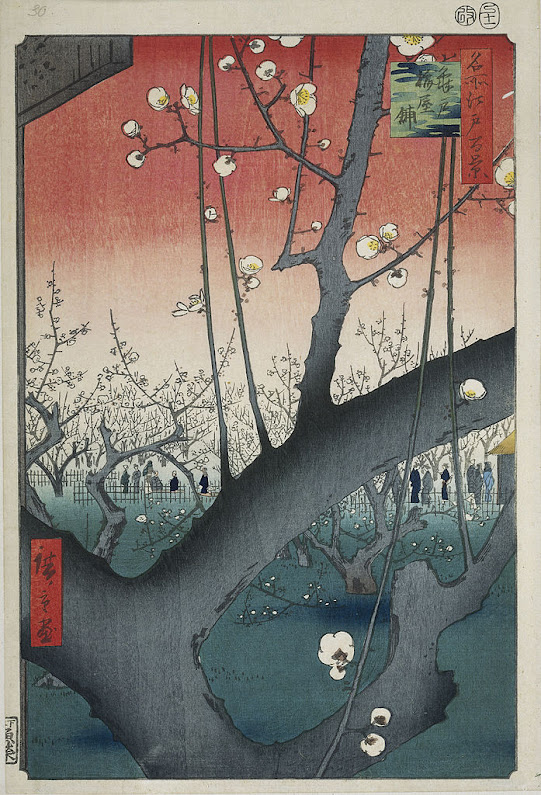 The painting is dissected on the diagonal by a tree cutting the painting into two pictorial planes, one containing the angel and Jacob wrestling and the other containing women, men, a priest – and a cow (I like the cow).

Gauguin owned several Japanese woodcuts by the artist Hiroshige (pictured here) and it is believed that he borrowed the imagery of the tree cutting across the picture along with the color red, from this print.

Gauguin himself comments about the work,

“I think I have achieved in the figures a great simplicity, rustic and 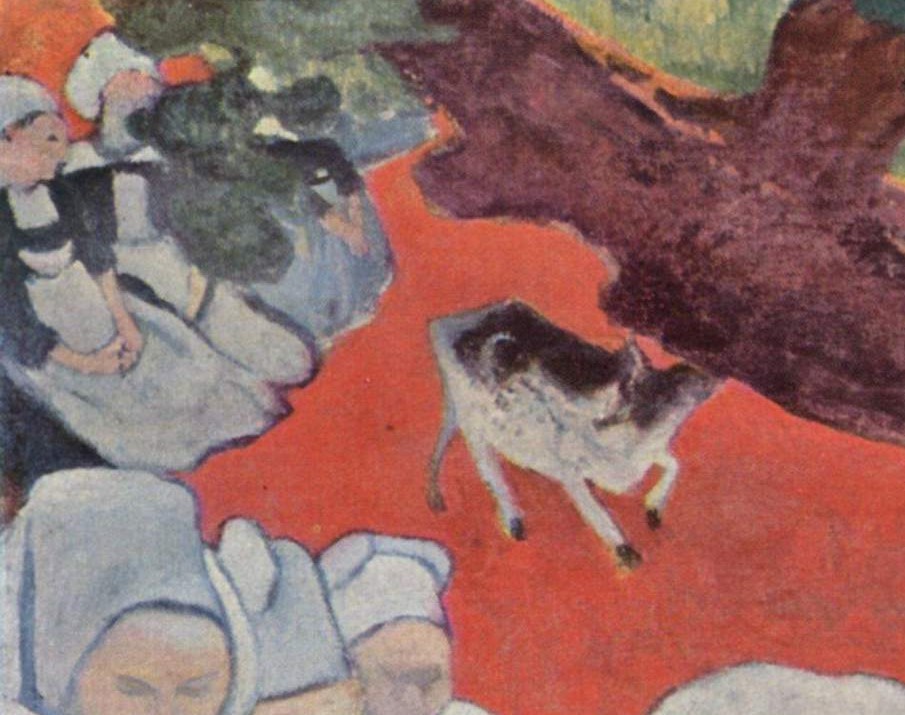 superstitious. The whole thing is very severe. The cow under the tree is very small in comparison with reality and rearing up. For me in this picture the landscape and the struggle exist only in the imagination of the people praying owing to the sermon, which is why there is contrast between the life-size people and the struggle in its non-natural, disproportionate landscape.”

The painting’s title is ‘Vision After the Sermon’, and Gauguin uses the red background to alert us to the fact that this group is seeing a vision. Red traditionally referenced the presence of God. We are meant to contrast the physical realm of the women on this side of the tree against the struggle happening in the spiritual realm on the other side of the tree. 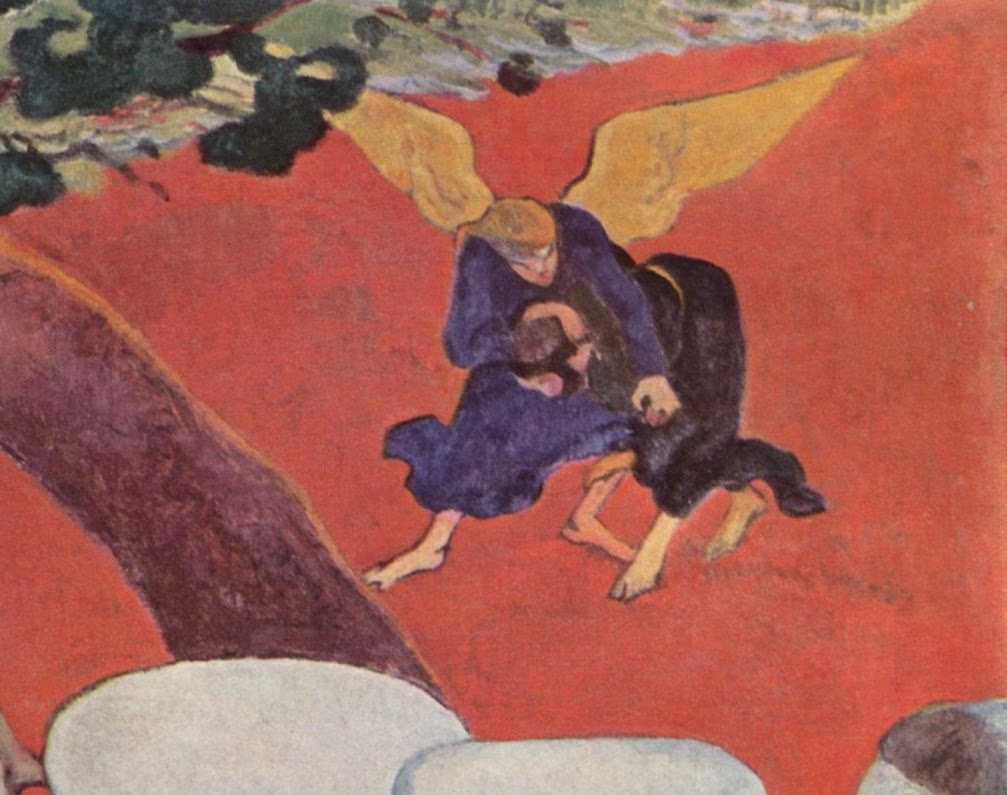 And the struggle, the vision, is really the point of the painting, and it is one that has created multiple interpretations. Some say that it is the struggle between good and evil that goes on in every Christian soul. Perhaps this is the meaning as the painting was commissioned to decorate a church. That explanation doesn’t seem to fit with what I understand about Gauguin, so I lean toward a different interpretation.

The 19th Century Romantics saw the artist soul as anguished as it tries to reveal truth, and so Jacob is the struggling artist. Struggling against what, who can say. We do know that Gauguin was struggling with the Parisian art scene and all of it’s expectations. We know that he was struggling personally with his art, wanting to push the boundaries into new territories, and we know that he felt he was a ‘savage’ living in civilization. So perhaps Jacob is Gauguin, and the angel represents his many different oppressors. 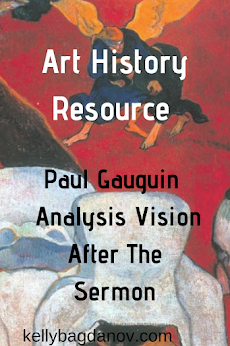 Throughout his life Gauguin seemed to be seeking some sort of spiritual connection, one that many in his group felt had been lost in the modern age. He didn’t find what he was looking for in the church or in the philosophies of his day, or even in his art. His searching eventually led him to retreat to, what he believed was a simpler, more primitive culture that felt more ‘real’ on the islands of French Polynesia.

We know that he died alone on an isolated island in French Polynesia. We cannot say if he found what he was looking for.

If you enjoyed this post on art you can find more art posts here.  And I’d love to hear from you in the comments.

I’d be honored if you’d subscribe to the blog to get updates when new art posts go up.

We’ve examined how the description of a Rhinoceros came to Dürer in this post, now we will move on to the actual print of Dürer’s Rhinoceros, how it was made, and what the words on the top of the print reveal. This print is a woodcut. A woodcut is a form of printing where a design

Nicola Pisano Nativity Panel in the Baptistry in Pisa.

The work we will be considering is the Nativity panel in the Baptistry in Pisa from a pulpit designed and sculpted by Nicola Pisano completed in 1260.  This information is also available in a video, link is at the end of the article. A bit of background is necessary to put this work into it’s