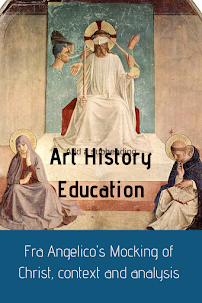 Fra Angelico the Mocking of Christ is a compelling vision of the suffering of Jesus. I’ve been anxiously waiting to get to this painting in the Lent Devotional because I’ve found it both intriguing and beautiful.  I hope you enjoy it as much as I do. If you would like to purchase the the rest of the devotional you can do that here.

You can also read about another Fra Angelico work here.

Here is an excerpt from the Devotional Series that you can purchase here:

Today I’m excited to introduce you to a work that has intrigued me for years. This fresco is unlike any other painting of the Mocking of Christ and was painted during the  early Renaissance by Fra Angelico on a wall of Cell 7 in the Convent of San Marco in Florence.

Fra Angelico was an early Renaissance painter who was also a Dominican friar. When he joined the Order of Preachers, or Dominicans, he changed his name to Fra Giovanni da Fiesole, or Father John of Fiesole. Later he was nicknamed Fra Beato Angelico, or Fra Angelico. His modest piety and his beautiful paintings earned him the nickname Father Angel, or Father Beautiful Angel. Now he is almost universally referred to as Fra Angelico.

As one would suppose, his art revolved around religious themes, in fact, almost all of his commissions came from the Dominican Order.

Angelico’s art embraces the graceful beauty of the International Gothic Style, a style supremely suited to painting contemplative works. Additionally, Angelico was influenced by Giotto and Humanism which was  flourishing in Florence in the 1400’s.

Angelico was the rare individual who could adopt the advancement Humanist philosophy brought to art, while remaining in his  religious order.

Saint Dominic founded the Order of Preachers in 1215, responding to a need for informed preaching. He began the order in response to the perceived need for more informed preaching that could address heresies and lead more souls to true salvation.

Although, with this work we will be focused on the lives of Dominican Friars who lived at San Marco, it should be noted that women were the first followers of Saint Dominic, and that women have played an instrumental role in the work of the Dominican throughout their history.  The Nuns established many of the schools that spread the teachings of St. Dominic across Europe.

The Dominicans were largely learned, urban individuals who embraced a contemplative life style, and the order valued education, producing many of the theologians and philosophers of the Middle Ages.

Their preaching was not done by words alone. According to Dominican teaching they were to ‘docere verbo et exemplo’ or to teach by word and example.  Their lives, transformed by the practice of meditation, prayer and contemplation were to be an integral part of their preaching. Study was their chosen method of overcoming threats to the church. To this end they were diligent about establishing schools in the areas they expanded into.

The Dominican order  believed visual images were a great aid to prayers, meditation, and study, and many of their order pursued the arts as part of their calling.

Have you ever bought something new, like a blue car, and then you see that same blue car everywhere? Or someone you love gets pregnant, and then every other woman you pass is pregnant?  It’s like we suddenly develop a hyper-awareness. Same thing happened to me with plastic.  Once I saw the problem I couldn’t

Welcome to day 23. A man of many names Tintoretto started out as Jacopo Comin, or Jacopo Robusti but came to be known as Tintoretto which means ‘little dyer’ as his father was a dyer. Later the name Il Furioso would be added because he painted with such energy and speed. The eldest of 21