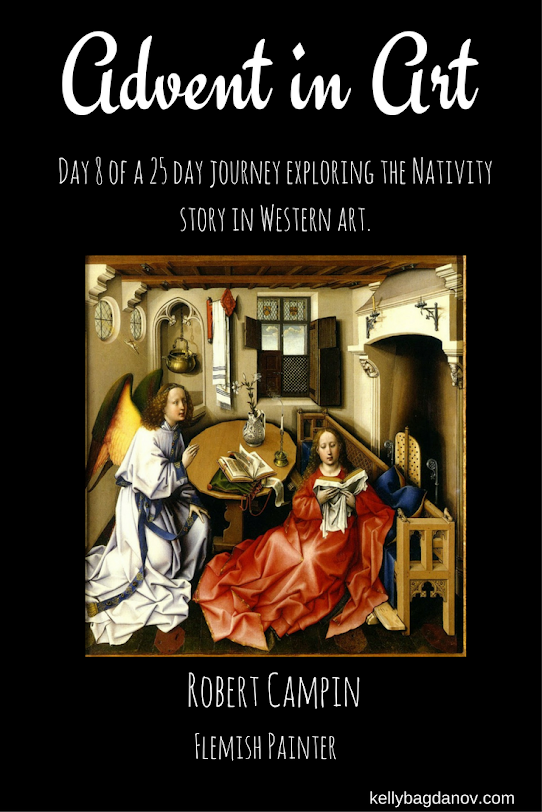 The Merode Altarpiece by Robert Campin is an annunciation triptych full of symbolic meaning that was intended to lead the faithful into deep contemplation of the mysteries of Christ leaving heaven to become a man. In this post we will be exploring the backstory and context of the work. If you wish to read more about the iconography and hidden meanings in the piece you can check out this post here.

Robert Campin (c. 1375-1444), was also known as the Master of Flemalle. One of the first great masters of the Flemish and Early Netherlandish school, his works exemplify the characteristics of the Northern Renaissance.

It is easy to take for granted that the label on a work is a certainty. The reality is often attributions are best guesses and as more information is discovered changes have to be made. In this case three similar paintings were found that were Campin’s, and those allowed the Merode Altarpiece to be added to the body of work attributed to Robert Campin.

Due to this confusion, in the past, many of his works have been attributed to other artists, and some are still disputed. He didn’t routinely sign his paintings, and when he did it was often on the frame. Frames do not always survive, so without a signature experts must resort to detective work and make a best guess. As more information comes to light, new evaluations are made.

The Merode Altarpiece, painted in 1425, is a small, portable work intended for personal devotions. The work is a triptych, meaning it has three panels that are hinged so that the side paintings can be folded in. When the Merode Altarpiece is displayed unfolded the work is 2 feet high and four feet wide. This size meant the work could be easily transported and displayed in a home.

The central panel was painted first, probably without a commission. The artist would choose a popular theme, paint it and then once it was purchased the side panels would be added with any details the new owner wished added in. In this case the donor wanted himself painted in on the left wing. It was common for the person who purchased a work to have themselves painted in. The side panels are hinged so that the piece can be folded up.

The work is currently held by The Cloisters, part of the Metropolitan Museum in New York City.

In this altarpiece the donor and his wife are painted on the left panel. This follows a long tradition of painting the person paying for a work into the painting in an attitude of worship.  During the Middle Ages and the Renaissance these portraits, sometimes called votive portraits, were often on side panels as if the figures are present, watching the sacred stories unfold.

The word votive means consecrated or performed out of devotion. If a person purchased an altarpiece for a public building their generous gift would ensure that they would have prayers for their souls in perpetuity. Sometimes the donors were groups of people, perhaps a guild or confraternity.

In later Renaissance works artists began to work the donors into the paintings themselves, making them a face in the crowd, a soldier etc.

Tempera paint, used during the Italian Renaissance, is opaque and quick to dry. Tempera was made by mixing pigments with water, then egg yolks, and generally one other binding ingredient. Without an additional ‘glue’ element the tempera would crack and even flake off. Artists often covered a work with a varnish to give it some of the shine and deep color that oil paints achieved, but varnishes darkened with time and couldn’t create the light reflecting properties of oil. Tempera was the medium used in fresco paintings, or paintings on plaster walls that were typical in Italian churches and palaces.

By contrast, the Merode Altarpiece is an oil painting on a wood panel. Wooden panels while not unheard of in Italy, were far more common in the Northern areas of Europe. The panels were better suited to the medium of oil and Campin and his contemporaries pushed the boundaries of what could be achieved with oils.

Oil painting was being perfected in the North where its luminous qualities, and the ability to paint with more clarity and detail were prized. The pigment is suspended in an oil, typically linseed. This allows a higher pigment load and deeper colors. The oil also allows a great deal more variation in colors, which meant artists could paint with greater precision. Oil is translucent, light could pass through it. When applied in layers artists could create a great deal of depth and shadow creating effects similar to deeply colored jewels. They could slowly build up layers, solving a bit of the mystery behind those fine filmy layers sometimes seen. Oil dried slowly and this allowed artists more freedom to correct and change as they worked.

These layers of oil paint gave objects a depth and beauty that was startling to a world used to the flat appearance of tempera paint.

Northern painting is especially noted for its use of light and color, which was largely possible by the adoption of oils. I am drawn to the work of these Northern artists because I prefer the clear, intense colors and crisp light. Once you become familiar with several Northern painters, they are easy to identify. There is a distinctive feel that is hard to define with words.

As we examine Campin’s work more closely, note the colors and the play of light, it is gorgeous. Of course, in reproductions you lose the play of light through the oils, and the exquisite details are hard to appreciate, but even a reproduction gives us a hint of the depth of color achieved. When viewed in person, works like this one take the breath away. I hope you will have the opportunity to view some in person.

Characteristics of Northern Painting Exhibited in the Merode Altarpiece 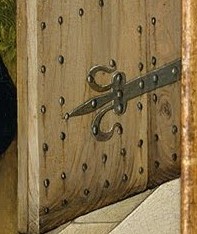 Beyond the actual paint, there are a few other characteristics of Northern painting to keep in mind. The Northern Renaissance developed independently, in ways that differed from the Renaissance in Italy. In Italy the combination of religion, humanism, and classicism was key. This meant ancient architectural details and an emphasis on linear perspective (discussed here) and aerial perspective (discussed here), were emphasized. In classical art the artists tried to ‘trick the eye’ to fool the viewer that they were looking at the real thing. They also valued mythical and Biblical figures, not everyday events or people.

In Northern art, classical elements are missing. Religion and humanism are evident, but without the classical elements. Artists in the North approached the subjects of their paintings differently. There was an interest in, and elevation of, everyday life, not just the heroic moments of history or myth. While painting the nobility was certainly done, there were also paintings of common people going about their days. This created a whole new category of work, the genre painting.

Much of the inspiration for the Northern Renaissance came from the Illuminated Manuscripts. As we saw earlier, these amazing works had achieved a great deal of realism and obsessive attention to detail. The artists of the North didn’t just paint details, they made them intricate, sharp, and clear. Often the details were imbued with meanings. Later in our discussion of this piece we will see that even the small carvings on the bench carried meaning and added to the story being told.

In fact, the north valued a certain secretive element to the meaning of the details. Some symbols such as bread and wine for the Eucharist were universally understood, but others required thought and detective work to piece together. This intellectual exercise was meant to extend the contemplative value of a work, there was always more than meets the eye, more to discover the longer one considers a painting.

The hidden meanings within this work are so extensive I’ve dedicated another post to their discussion, you can find it here. If you’d like to see art history videos that I’ve done you can check out my youtube channel here.

On a typical homeschool morning it was a major accomplishment to have all the kids up, dressed, fed, and chores done.  Then we need to start school, which often went something like this. Math first, except child # 2 can’t find his book and child #4 broke his pencil. After 10 minutes of searching everyone

Plastic Free July is currently going on…you can read about why I got on-board here. About 6 months ago we moved into a new place and our tap water didn’t taste great. I had committed to cutting plastics and began looking for a filtering system that was simple, effective, inexpensive, AND didn’t involve plastic filters

The Giotto Arena Chapel Nativity is the subject for day 3 on our Advent in Art Series. And so it was, that, while they were there, the days were accomplished that she should be delivered. Luke 2:6 Background of the Giotto Arena Chapel In a Northeast corner of Italy is the city of Padua. Even